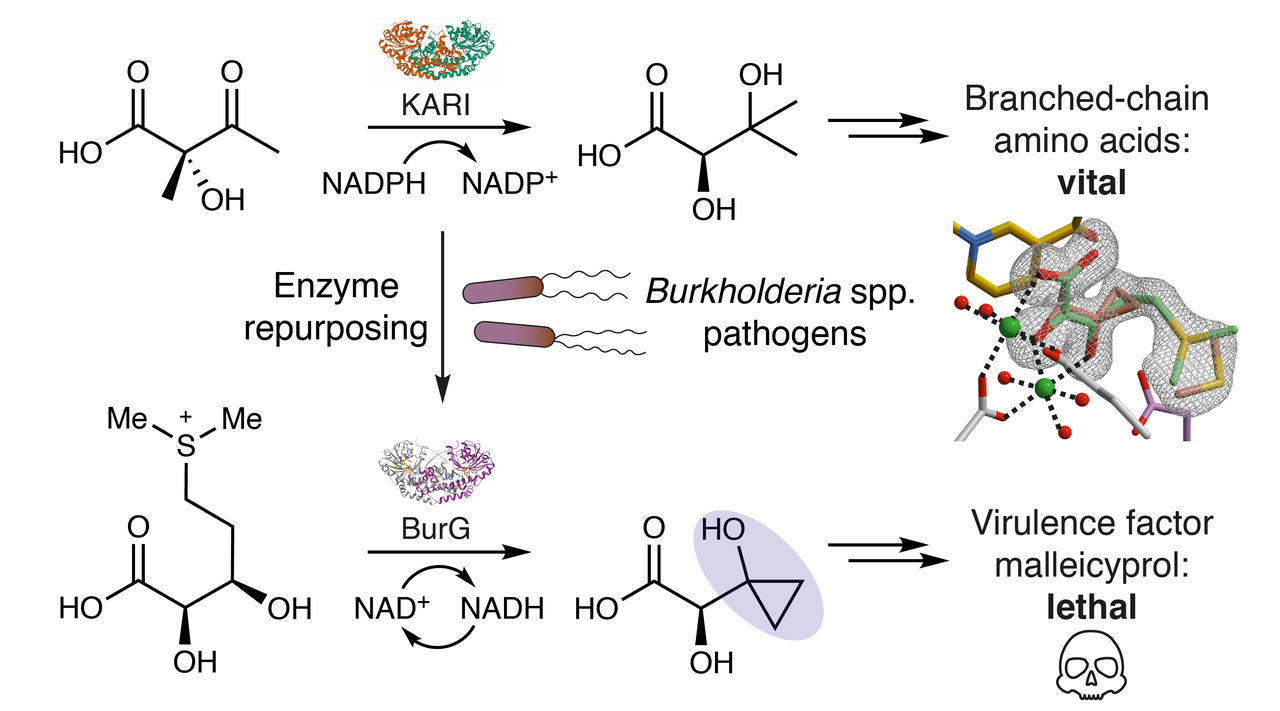 Burkholderia mallei and Burkholderia pseudomallei, which comprise the B. pseudomallei group of micro organism, are infamous human pathogens.1 Each micro organism present excessive mortality charges in human infections and are extremely recalcitrant to antibiotic therapy.2 This has prompted intensive analysis into the molecular mechanisms of an infection with the purpose of disarming the pathogens on a molecular scale by antivirulence remedy.2 The work revealed in Nature Chemistry by the Groll and Hertweck teams experiences on a cyclopropanol synthase (BurG) that builds the warhead of the malleicyprols, that are small molecule toxins essential to the virulence of B. pseudomallei group micro organism. In-depth data on the formation of the important thing cyclopropanol ring probably lays the inspiration for the event of anti-virulence brokers to fight these pathogens.

The primary steps in direction of elucidating a novel enzymatic path to cyclopropanol formation got here with our discovery of the small molecule burkholderic acid,3 a discovering reported concurrently by the group of Sean F. Brady.4 The identification of burkholderic acid (syn. malleilactone, as named by the Brady group) was the results of the efforts of each teams to awaken silent biosynthetic gene clusters (BGCs) from B. thailandensis. The pure product repertoire of B. thailandensis piqued our curiosity as a consequence of its shut relation to B. mallei and B. pseudomallei.5 The Brady laboratory designated the bur BGC (frequent to the genomes of B. mallei, B. pseudomallei and B. thailandensis) as a virulence determinant by testing a bur knockout pressure of B. thailandensis in eukaryotic an infection fashions primarily based on the nematode Caenorhabditits elegans and the amoeba Dictyostelium discoideum. But surprisingly, burkholderic acid, the principle remoted product of the bur BGC, just isn’t cytotoxic, that means that the way during which the bur BGC contributes to virulence remained unexplained (Fig. 1).

A better inspection of the bur BGC revealed a posh genomic structure with an unlimited extra of encoded biosynthetic enzymes than seemingly vital for the formation of burkholderic acid. This raised the likelihood that additional pure product variety originating from the BGC may very well be behind the virulent phenotype of B. thailandensis. We had been additionally intrigued by an obvious biosynthetic illogicality; the straightforward C3 propanone chain of burkholderic acid arises from truncation of methionine slightly than the energetically less-demanding use of propionate as a constructing block.

We got down to decide the enigmatic function of the bur BGC within the virulence of B. pseudomallei group micro organism. Reexamination of the metabolic profile of B. thailandensis revealed a collection of compounds, named malleicyprols, that confirmed excessive structural resemblance to burkholderic acid.6 These compounds differed from burkholderic acid in a single placing element – the presence of a cyclopropanol moiety as an alternative of the puzzling propanone unit. Subsequent cytotoxicity assays established the malleicyprols because the true virulence elements of the bur BGC (Fig. 2). Our discovering that degradation of the malleicyprols results in the formation of burkholderic acid provided a believable rationalization for the counter-intuitive use of methionine; methionine is the biosynthetic precursor of the cyclopropanol unit of the malleicyprols, whereas its incorporation into the propanone unit of burkholderic acid could be rationalised by malleicyprol degradation.

For the reason that bioactivity of the malleicyprols may very well be pinpointed to the weird cyclopropanol unit, we reasoned that particular inhibition of the formation of this cyclopropanol warhead from methionine might present a novel alternative for focused suppression of B. pseudomallei and B. mallei virulence. To kind the idea for analysis on this path, we sought to elucidate the intermediates and enzymatic mechanisms concerned in cyclopropanol formation.

By way of cautious mass spectrometric examination of extracts from a library of bur gene deletion mutants, we recognized varied sulfonium acids as biosynthetic intermediates that gathered in particular mutants.7 Notably, the sulfonium group is a well known structural motif employed in natural synthesis to assemble strained three-membered rings through the use of dimethyl sulfide (DMS) as a leaving group. Within the biosynthetic pathway to the cyclopropanol moiety of the malleicyprols, DMS already turns into evident as a leaving group in step one, the place methionine is transformed to the sulfonium acid S-methylmethionine (SMM). A lot of the complexity of the bur BGC is accounted for by the varied extra steps together with truncation, elongation and hydroxylation of the SMM precursor, that have to happen earlier than the cyclopropanol ring is lastly shaped from gonydiol (Fig. 3).

The hydroxylation response that installs the α-hydroxy moiety of gonydiol (Fig. 3) generates the focus for cyclopropanol formation. As detailed within the present examine8, the cyclopropanol synthase BurG catalyses a transient oxidation at this α-position and thus generates a nucleophilic enediol. Intramolecular assault of this enediol results in the lack of DMS and cyclopropanol formation. The ensuing ketone is lowered by BurG, thereby producing the ultimate cyclopropanol-containing constructing block trigonic acid and leaving the general response redox impartial (Fig. 4). Protein crystallography provided distinctive snapshots of this central step of malleicyprol biosynthesis and revealed its cryptic redox chemistry.

Maybe most significantly, the invention of BurG as a key enzyme within the bur meeting line coupled with the elucidated 3D buildings provide priceless data for the event of selective inhibitors to fight B. pseudomallei group pathogens, for example by rational design. Promisingly, the chance of ensuing drug candidates having off-target results is probably going lessened by the truth that people don’t encode BurG homologues.