Transmission of Enteric Viruses via Saliva 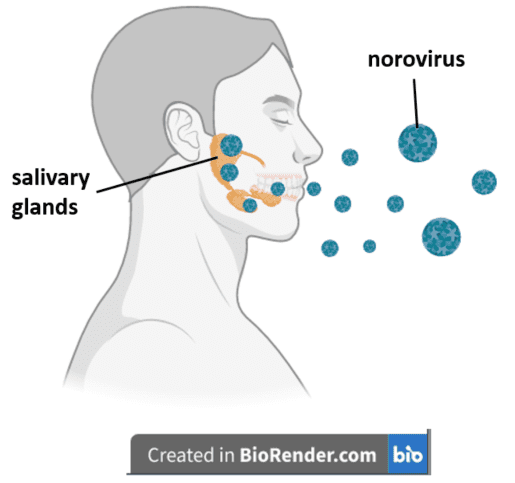 Norovirus and rotavirus are thought-about to be enteric pathogens as a result of they’re historically regarded as transmitted by the fecal-oral route; i.e., when consuming meals ready by somebody who didn’t wash their fingers correctly after utilizing the lavatory. In contrast to rabies virus, which replicates within the salivary glands and transmits via saliva, the presence of noroviruses and rotaviruses in saliva is normally thought-about to consequence from contamination, for instance by vomitus or gastroesophageal reflux.

It was subsequently shocking when a current examine confirmed that neonatal mice (“pups”) can apparently transmit enteric viruses to their moms throughout suckling. Following oral inoculation with mouse norovirus 1 (MNV-1) or epizootic diarrhea of toddler mice (EDIM, a mouse rotavirus), pups had secretory IgA (sIgA) of their intestines that elevated progressively over the course of two weeks. sIgA is a sort of antibody that gives immunity in mucous membranes comparable to these of the mouth, nostril, and intestine, and sIgA is often handed from moms to infants throughout suckling. Apparently, this sIgA improve in pups correlated with the same improve within the sIgA within the milk of the moms, although the moms weren’t contaminated and didn’t have any antibodies to both virus initially of the experiment (i.e., they had been seronegative). Contemplating that pups can’t produce their very own sIgA, it’s probably that the pups contaminated the moms throughout lactation, who then produced the sIgA and handed it again to the pups via their milk.

To rule out the likelihood that the moms grew to become contaminated by consuming feces-contaminated meals (i.e., by the normal fecal-oral route) as a result of they shared a residing space with their contaminated pups, the authors orally inoculated pup-free seronegative moms with EDIM, handled them with oxytocin to induce milk manufacturing, and analyzed the milk for sIgA and the mammary glands for viral RNA. Though the moms had been efficiently contaminated, as evidenced by the presence of EDIM RNA of their small intestines, there was no detectable EDIM RNA of their mammary glands or detectable improve of sIgA of their milk. This consequence confirmed that the contaminated pups handed the virus to the moms throughout feeding.

To additional substantiate this discovering, the authors orally contaminated one set of pups (pups A) with EDIM and positioned them again within the cage with their seronegative moms (moms A) for suckling. The subsequent day, moms A had been changed with “moms B” from a cage of uninfected pups (pups B), and moms A had been positioned with pups B. Two days after this change, all mice had been euthanized and analyzed for the presence of viral RNA. All moms had EDIM RNA of their mammary glands, suggesting that each units of moms grew to become contaminated by suckling pups A. All pups had EDIM RNA of their small intestines, suggesting that pups B grew to become contaminated by feeding from moms A, or by ingesting their fecal matter.

The subsequent set of experiments aimed to find out whether or not saliva comprises enteric viruses and if it may function a way for transmission. An infection of grownup mice with MNV-1 or EDIM revealed that these mice produced and shed virus of their saliva for as much as ten days submit an infection. To see whether or not this saliva was infectious, the authors fed it to pups as a way of inoculation. At three days after an infection, the pups had considerably excessive viral genome ranges of their intestines, corresponding to these noticed in pups inoculated with virus of fecal origin. This consequence recommended that the viruses replicated within the intestines and confirmed that saliva is usually a conduit for transmission of those enteric viruses.

TCID50 evaluation of varied cell populations remoted from the submandibular gland revealed that MNV-1 replicates in epithelial and immune cells, each of which categorical Cd300lf, the gene encoding the intestinal receptor for all recognized strains of mouse norovirus. MNV-1 an infection of mice missing the Cd300lf gene led to no detectable MNV-1 replication within the salivary glands, suggesting that this receptor is required for an infection of submandibular gland cells. Partial extraction of the salivary glands from grownup mice earlier than inoculation led to sooner clearing of the intestinal an infection, suggesting that the salivary glands could function reservoirs for replication of those viruses.

The outcomes of this examine problem the notion that noroviruses and rotaviruses transmit primarily by the fecal-oral route and lift a number of fascinating questions. Do human noroviruses replicate in salivary glands, and do people transmit noroviruses via saliva? In that case, would protecting measures along with handwashing (like face masks) stop transmission of noroviruses? Are different enteric viruses (like poliovirus) additionally transmitted via saliva? It is going to be fascinating to see future research that handle these questions.

[This paper was discussed in detail on TWiV 915.]

Again to high school: getting organised