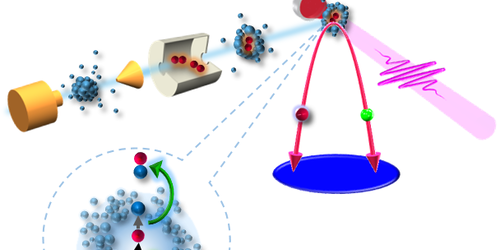 A laser nudges deuterium molecules into friction-free movement inside a superfluid.

Molecules in a fuel can freely rotate, feeling no friction from their far-off neighbors. In a liquid, nevertheless, friction has an impression due to the nearer packing of the system’s constituents. This friction usually manifests as drag that slows the movement of any rotating molecule, however Junjie Qiang of East China Regular College and his colleagues now present that this isn’t at all times the case [1]. They discover {that a} deuterium (

) molecule inside a superfluid helium nanodroplet rotates as if it feels zero friction. The discovering provides perception into molecular habits in a superfluid setting.

Researchers have exploited pulsed lasers to spatially align molecules in a fuel, utilizing these molecules to discover the dynamics of photochemical reactions, for instance. Not too long ago, alignment experiments have been prolonged to molecules suspended in liquid helium nanodroplets, permitting for research of a lot bigger molecules which are difficult to supply within the fuel section.

Stepping into the wrong way, Qiang and his colleagues explored rotation in a liquid helium nanodrop of

molecules, the smallest of all molecules. To get

contained in the nanodrops, they handed droplets containing 2000 helium atoms by

fuel. They then set the captured

molecules rotating with a femtosecond-pulsed laser beam. Monitoring the rotational dynamics, they noticed a friction-free movement that persevered for greater than 500 intervals—the identical period as noticed for

molecules in a fuel.

The group says that the method ought to permit measurements for even longer instances, permitting them to check the boundaries of the frictionless rotation. The method must also work with different molecules, corresponding to acetylene, thereby bridging the hole to a lot heavier molecules, together with carbon dioxide.

Rachel Berkowitz is a Corresponding Editor for Physics Journal based mostly in Vancouver, Canada.